I cannot tell you how much I love this movement. But don’t confuse love with ease – changing the world doesn’t happen after just one event!

The first time my colleague Kaare challenged the city (of what – 3 million people? No biggie…) to say hi to each other for a weekend and see what would happen, I must admit I loved the idea. But when I went out on my own in November 2013 to do it for myself… it wasn’t that easy for me. I’m not a natural talker and I usually like to keep to myself.

The very first thing that I learned was how important it is to make eye contact with strangers first. If you go around saying hello, people may not know you are speaking with them, especially on transit, when most everyone has headphones on and are looking down at their phones (I was!).

So I decided that the Skytrain platform or train was not the best way to test it out. But when I went on the street, I went one person at a time. That first “hi” – and a “hi” back. YES! From there, I went on my weekend morning run saying hi to my neighbours. People were surprised, but pleasantly. I don’t remember getting any adverse reactions.

Fast forward to 2014, Kaare said she wanted to put it on again, this time with the manpower and lead time needed. I could have just let her be and participated again on my own, but a greater force compelled me to help more. I thought that if Conscious PR stepped in to handle the media outreach for her, that would free her and her team up to do much more. So that’s when we came on board as a sponsor. 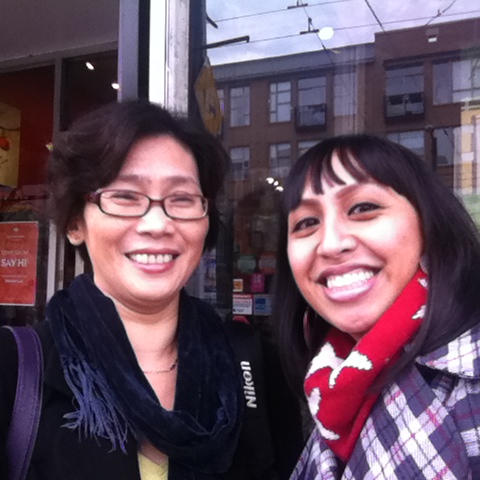 I also realized that it is not enough just to promote the campaign in media and put Kaare in the spotlight as much as possible – I had to go on the street team myself to see the effects of our efforts. And boy, it is not easy to stand in front of businesses and stay positive. I thought my street team days were over in my 20’s! I found that by the end of the day, it was hard to keep up the energy and the smiles. And, sometimes you get nothing back from people, not even a hello. But it’s not about getting something back, it’s about giving. When you see a smile on someone’s face just by saying hello to them, that’s enough. I got more than just hellos this weekend. I had some great conversations, and seeing people excited about what we were doing (both online and offline) – and the smiles on their faces after getting a treat for their small effort – made all of my time worth it. 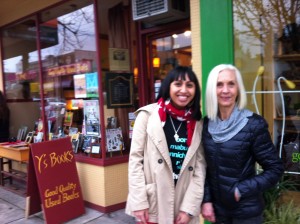 With a Y’s Books regular on Main Street – I loved her hair!

I also discovered that you have about 3 seconds to explain the campaign to passersby. If you can get their attention long enough to get past the initial hello, you can then explain that it’s Say Hi to a Stranger Weekend. People then nod their heads and say “Oh.” And if they STILL stick around, that is when we would talk about the businesses we were standing in front of, and the offering they were making for strangers who came in to use the code phrase.

I know that there is a real need for this movement, not just in Vancouver, but in our world. So next time we come around, it’s going to be bigger (as in more visible and more participants!), and better. Please, if this calls to you and you know in your gut that you’re meant to be a part of it, reach out to us, because we need you to keep it alive.